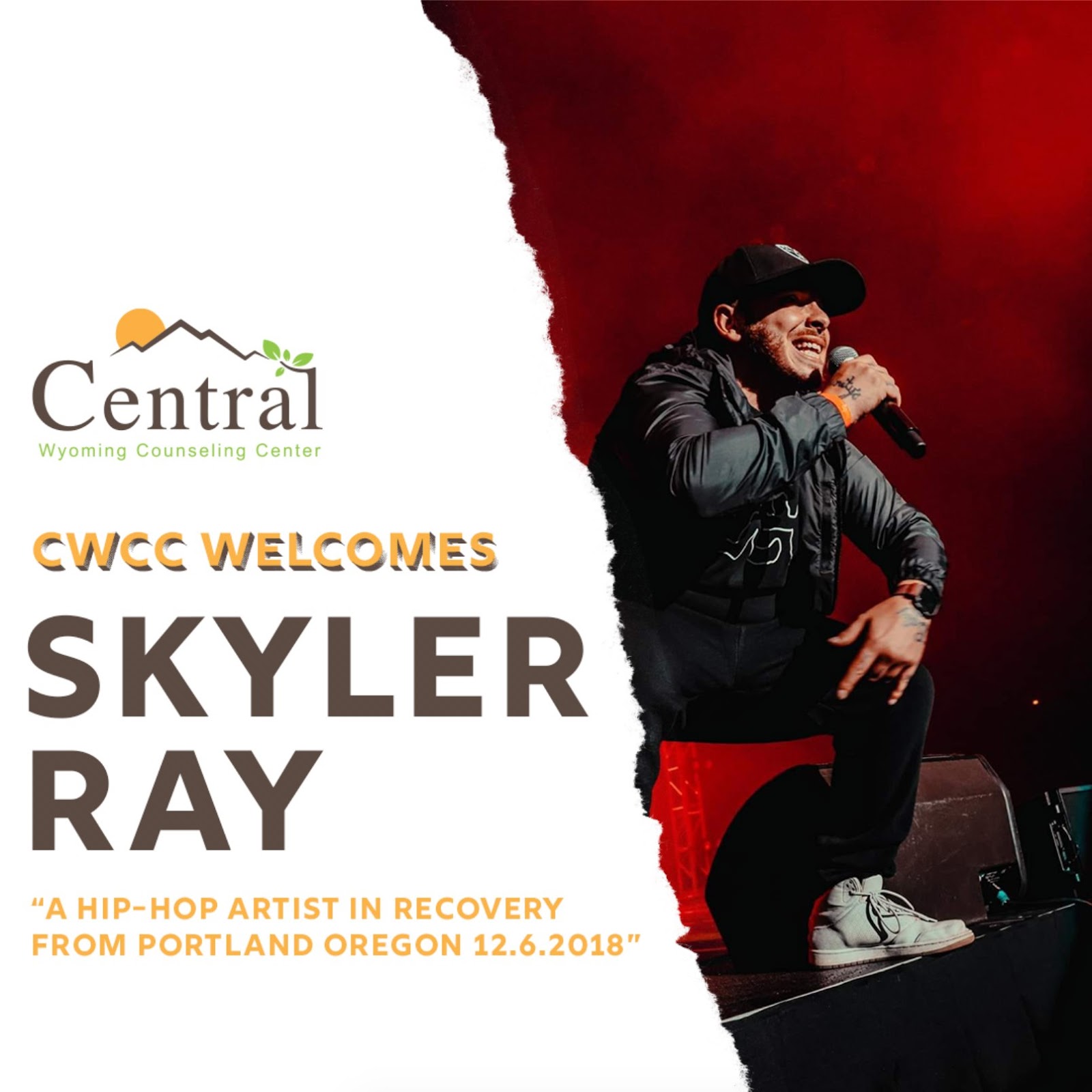 “Look at me. Maybe I’m weak. Sometimes I hurt so bad, I can’t speak. Maybe I’m selfish, or I don’t know what help is. All I know is that I have never felt like this; this is me at my lowest. Okay, maybe that’s a lie, cause for as long as I can remember, I wanted to die. Like, how do I get help? I’m a man who struggles with mental health. I’m so deep in addiction, that the thought of death is uplifting.”
– Skylar Ray

If walls could talk, treatment and counseling centers would have stories that would break your heart. But they would also have stories of redemption – stories like that of Skyler Ray. Which is perhaps why Ray and his partner Kala Mulcahy travel around the country to different treatment and counseling centers, sharing their music with the residents there.

But their music is more than just melodies and memories; it’s a way to tell their story.

And what a story it is.

Ray has lived hard. He grew up fast.

“I started young, drinking and smoking,” he stated. “And then around 18, I found myself homeless and, next thing you know, I was on meth. I went from smoking it to shooting it and I found myself sleeping in downtown Portland on the sidewalks, in the doorways.”

And that could have been the end of his story. For many of his contemporaries, that would be the end. The addiction is too strong, the trauma is too deep, and there’s nothing to do but attempt to find peace at the bottom of a bottle or the tip of a needle.

Skyler Ray was close, so close, to being a casualty of addiction; just another statistic. But something funny happened in that 8×10 jail cell.

He found music and, in doing so, he also rediscovered himself.

“Every time I would be incarcerated before, I would always think, ‘When I get out, I’m gonna bet back to music,’” he said. “But every time I got out, I went back to the streets.  With that being said, this last time I was sitting in prison, I was sitting there and I was having the same conversation I found myself having 20 times prior. And I remember looking around and there was nobody there, I was talking to myself, and I was thinking ‘Why do I keep lying to myself? Who am I trying to impress?’ So I told myself that, when I got out, I was really gonna do it this time. And that was my moment of clarity.”

A moment of clarity is something that many addicts will eventually come across. Sometimes it works and sometimes it doesn’t, but it’s that moment where you’re faced with a choice: do I keep going down the road I’m on, or do I turn left? Do I try to get off it? Do I take my life back? Can I take my life back?

Ray did. And, in doing so, he chose to help others take back their lives as well.

In the years since, he has focused primarily on his music, channeling his addiction and his trauma and his struggles and using them to tell powerful stories that, unfortunately, many people are able to relate to.

“I came up with a gameplan,” he said. “I realized that I had to learn about myself in prison. I had to learn to love myself. That way, I’m really doing it for me, so I could keep an integrity about it. So what I do behind closed doors; the results will come to light. And so I took that time to build and I came out with an action plan. I lined my walls up with poster boards; from dream goals to long term goals to short term goals.

And I really stuck with it. I didn’t cut corners.”

The results did come to light, they speak for themselves. Ray focused on his music, on his stories, and on bringing them to others. He has slowly but surely built a name for himself on the music scene, which is what led him to the Central Wyoming Counseling Center, as part of a nationwide tour that he and his partner have embarked on.

And they wouldn’t have even heard of the little town of Casper, Wyoming if it weren’t for Jenny Hunter.

Hunter and her husband lost their son, J.R., to suicide a number of years ago. Since then, Hunter has dedicated herself to suicide and mental health awareness campaigns, creating yearly events like ‘J.R.’s Hunt for Life,’ and even starting a podcast called ‘Safe Talk.’

It was on ‘Safe Talk’ that Hunter first spoke with Ray and Mulcahy, and that’s where the idea was born for them to come perform in Casper.

“We have J.R.’s Hunt for Life and we have a support page that’s global,” Hunter said. “And we have several admins on the support page around the United States, and one of the admins in Texas, her name is Starr, found out about Skyler and she contacted him and told Skyler and Kala about J.R.’s personal story. And then they wrote a song regarding him and suicide and they posted it for me and it was very touching. It touched me because I know that addiction and alcoholism and things like that are precursors to suicide at times. And from there we just began a friendship.”

Hunter had both Ray and Mulcahy on her podcast and all three shared their stories with each other and with their listeners, and Ray explained that he and Mulcahy were in the middle of a tour.

“They told me they were doing this recovery tour and I said, ‘Oh my gosh, I would love to get you out here and talk to our people because with the stats in Wyoming, the suicide rate and that kind of stuff, I think you could be such an inspiration.’”

So, Jenny contacted Kevin Hazucha, the CEO of the Central Wyoming Counseling Center, and they put together a plan to bring the music duo to Casper.

On July 5, 2022 Skyler Ray and Kala Mulcahy performed two sets for the residents of CWCC; one for the men and one for the women.

“It went really well,” Ray said. “We went and performed for the males first, and then we did the ladies. And it was really cool. We made a nice connection. The guys showed a lot of love and it was really cute because on the way out, they clapped us out. They were really excited and that was really nice. A lot of people came up and they said they related to a lot of it. And I think it was, especially given the situation and what CWCC is and what the residents are going through to have to be there, it was really special.”

All of Ray’s songs are from the heart. They’re all stories that come from his life, and Mulcahy’s life. It’s tough stuff. It isn’t pretty. It isn’t wrapped up neatly with a bow. There’s a lot of trauma work in their music; a lot of vulnerability. And that’s exactly what the residents of CWCC needed. They needed to see that there was life beyond those walls; that they weren’t at the end of their story, they were at the beginning.

That’s one of the big messages that Ray tries to impart on his audiences during his shows, and it’s an idea that is shared by the Central Wyoming Counseling Center; asking for help does not make you weak. In fact, it’s one of the strongest, most courageous things you could possibly do.

That’s something that Ray had to do and, in doing so, he realized how strong he actually was. And that’s the message that he wants to promote to others, which is why he and Mulcahy choose to play at treatment centers instead of the typical bar and coffeeshop scene.

“We played some bars, and that was cool, but we just thought we could make a bigger impact this way,” Ray said. “Like, if you know who you’re speaking to, then you know how to find them. So we thought it would make more sense because this is our journey and this is what we’re trying to say, so we should find the people that really want to hear it.”

The residents at CWCC wanted to hear it; maybe not all of them, but definitely some of them. Because here’s the thing about addiction; it’s not a disease, it’s a symptom. It’s a symptom of something much deeper, much darker, much more insidious. It comes from trauma, from trying to bury something and keep it pushed way deep down, so that you don’t have to feel it. Most addicts turn to alcohol or drugs because they’re trying to avoid having to feel. Sometimes, the pain is too real, the voices are too loud, the reality is too harsh. So, we escape. But turns out, that escape route is actually a dead end in disguise.

That’s something Skylar Ray eventually figured out. He finally got tired of trying to escape and he realized that the only way to get over his trauma was to go through it. So, he did. He traded in that bottle or that needle for a pencil, and he got to work. In doing so, he and his partner have produced a collection of songs that speak right to the heart and soul of those who are struggling.

Skylar Ray and Kala Mulcahy brought a bit of light to the residents of the Central Wyoming Counseling Center. They showed them that they weren’t alone, that there was hope beyond those walls, and that they were worthy of love. It took Skyler a long time to figure that out for himself but, once he did, he knew that he’d spend the rest of his life helping others find their own worth.