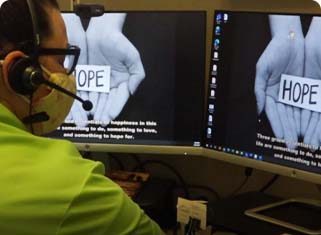 A crisis specialist waits for a call(Bobbee Russell)

CASPER, Wyo. (Wyoming News Now) – Now Wyomingites have the option to text the statewide suicide hotline if they are in a crisis or just need some extra support. People can text (307) 776-0610 or call the national hotline at 1-800-TALK.

In 2019, Wyoming had the second-highest suicide rates per capita. Kevin Hazucha, the CEO of Central Wyoming Counseling Center, said those high rates plus the added stigma don’t help.

“There’s a frontier mentality here and just by the virtue of the geographical space we live in people here feel like they have to do it alone. There’s too much distance between places here and limited services here,” Hazucha said.

People answering these calls and texts are crisis intervention specialists. They are trained in LGBT+ issues and much more. “They have training in human trafficking, Youth self-harm and Veteran difficulties,” said Bernice Hazucha, Suicide prevention call center director.

An anonymous donor gave them the funds to have this texting feature. Another one of their goals is to provide people who call with resources so they can get help if they need it.

“We are connected with WAMHSAC which are our sister partner agencies that anybody that calls here we can refer them to services here or closer to where they live,” Bernice said.

If people call or text between 4 to midnight a person in Casper will answer. Their goal is to be there 24 hours a day seven days a week. “We are looking to get additional funding to ramp up,” Kevin said.

To end the stigma, their motto is Asking for help is the new cowboy tough.